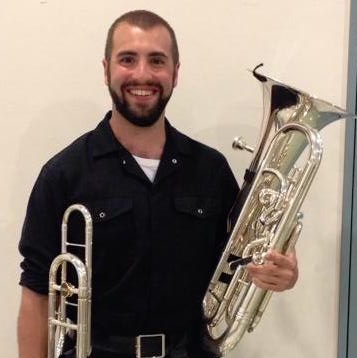 Ben is thrilled to be back with The Cadets for the 2023 season, his fourth year with the organization!

A Boston native, Ben graduated from the University of Delaware with a Bachelor’s Degree in Music Education, studying trombone with Dr. Jay Hildebrant, Paul Arbogast and Dr. Bruce Tychinski. Ben went back to Boston to obtain a Master’s Degree in Trombone Performance at Boston University, studying with Don Lucas, Toby Oft and Gabe Rice. Ben was also a graduate assistant with the Boston University Athletic Bands, under the direction of Aaron Goldberg, and taught/conducted the BU marching band and pep bands.

After graduating from BU, Ben was hired as a cast member of the Tony and Emmy award winning show, Blast!, as a low brass swing and euphonium soloist. Ben spent the summer of 2014 living out a life-long dream of performing that show and touring Japan. Because of Blast!, Ben has performed in and visited all 47 prefectures of Japan! In 2016 and 2017, Ben was again performing with Blast! in Japan, but as the trombone soloist with their new show, Blast! The Music of Disney. While touring with Blast!, Ben played trombone, euphonium, marching baritone, marching snare, percussion and didgeridoo. Ben’s trombone playing also took him to work on Royal Caribbean Cruise Lines from 2015 to 2018 as part of the house bands on the Navigator, Allure and Adventure of the Seas. Ben is still an active performer, freelancing with many ensembles and theater companies throughout Boston and New England.

Drum Corps was always a large part of Ben’s life. He began his drum corps career as a baritone player with the Citations of Burlington, Ma in 2005 until 2009 before going to the Blue Stars Drum and Bugle Corps from 2010 to 2012. Ben was then on brass/visual staff with the Spartans Drum and Bugle Corps in 2018 and 2019.

Ben is currently the middle and high school band director in North Reading, MA. He is a collegiate brother of Phi Mu Alpha Sinfonia and an honorary brother/sister of Kappa Kappa Psi and Tau Beta Sigma from Boston University.