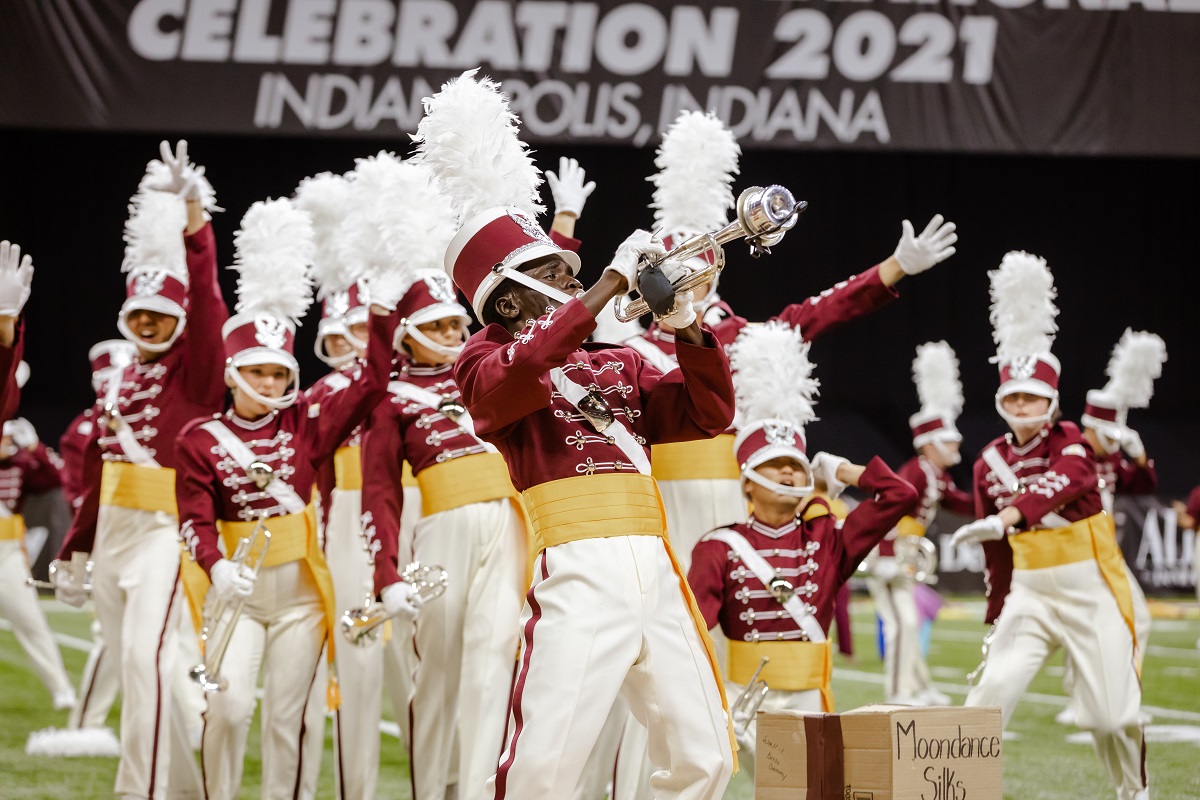 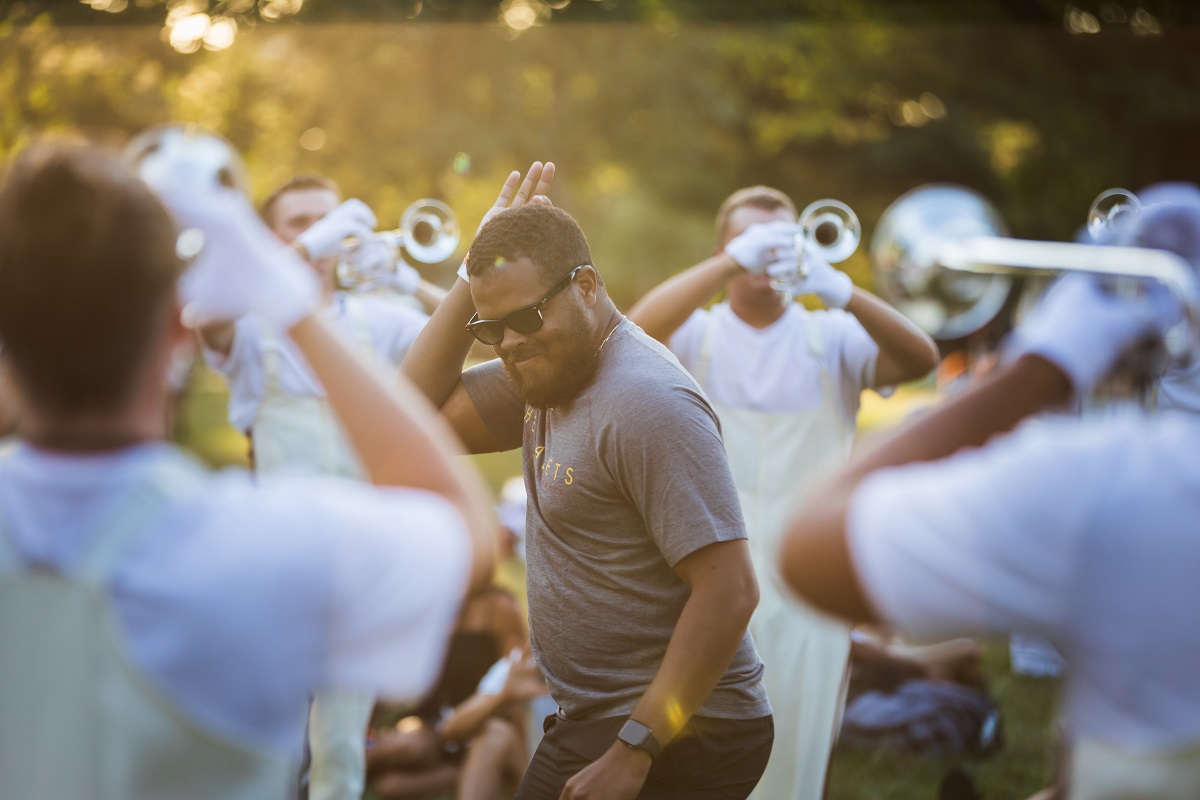 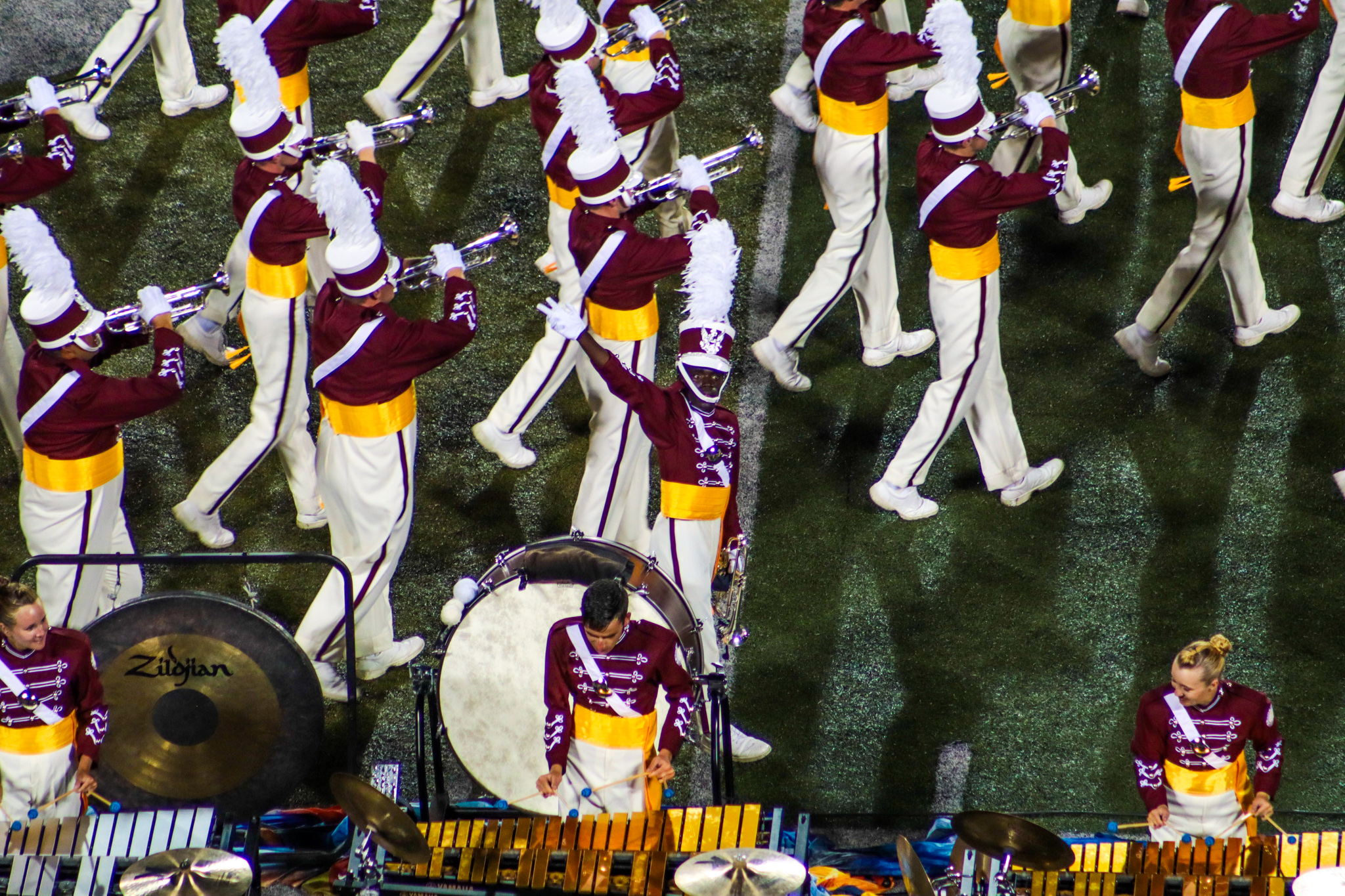 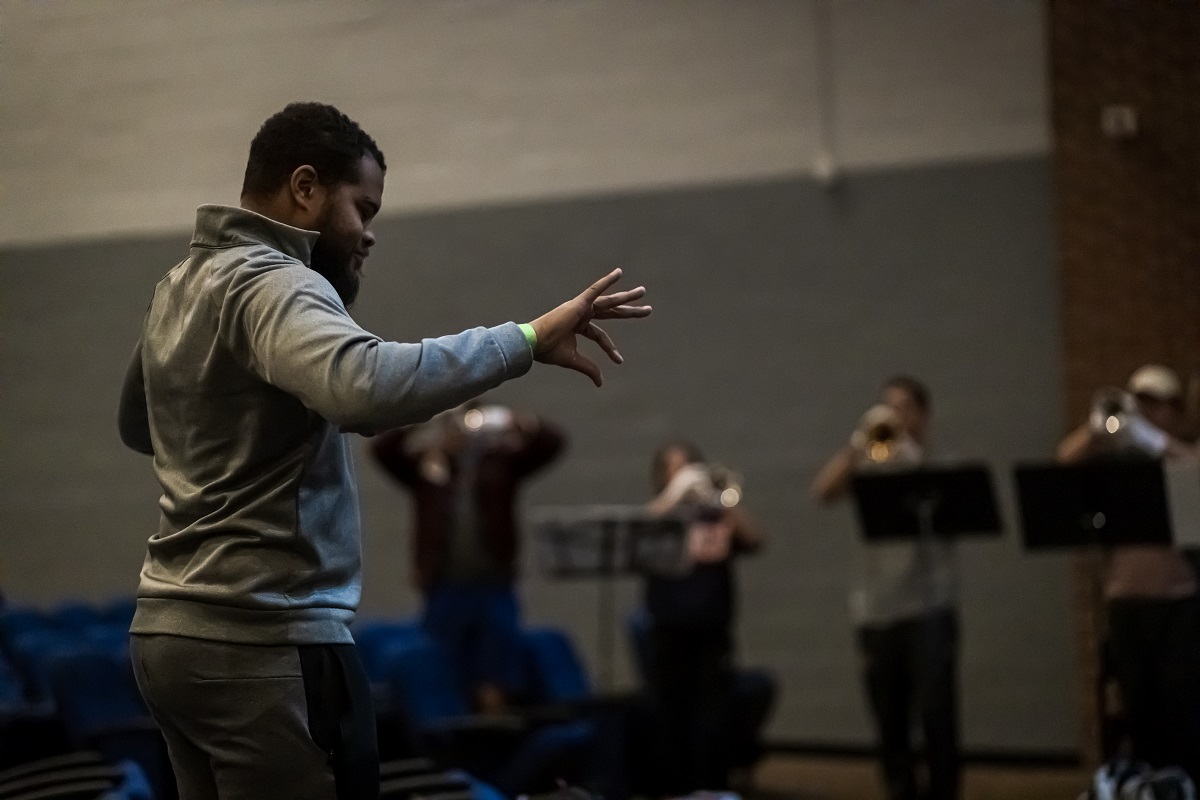 The worlds of HBCU marching band and The Cadets haven’t collided much through the decades, but when they do, special moments happen on the field. The best possible example played out in 2021 when Rigel Robinson, Jr. became a Cadet.

In May 2021, Rigel and his father travelled from Jackson, Miss. to Salem, N.J. for Rigel’s first experience with The Cadets.

The Cadets Brass Caption Manager, Dr. Matt Stratton, had reached out to the band staff at Jackson State University to see if anyone was interested in marching drum corps.

“I didn’t know much about drum corps, but it sparked my interest,” Rigel said. So Dr. Stratton encouraged him to come get a feel for it at the May Camp. He says he was relieved to be welcomed with open arms.

“I met Rigel’s dad that Friday night of his first camp,” Denise Bonfiglio, CEO of Cadets Arts and Entertainment and Director of The 2021 Cadets, recalled.

“I never let my son participate in anything that doesn’t make him better,” Mr. Robinson told Denise skeptically. He observed every aspect of the rehearsal weekend to determine if The Cadets met the Robinsons’ standard of excellence.

Come Sunday afternoon, Denise checked in. “So, how did we do?” she asked. The Cadets had passed the test, and Rigel joined a soprano legacy dating back to the early 1930s.

Whatever benefit The Cadets gave to Rigel last summer, he gave more to the corps. Rigel is the trumpet section leader of the Sonic Boom of the South, the Jackson State University marching band. He is pursuing a degree in Music Performance with a focus on trumpet.

The 2021 program required a trumpet solo, and the staff had their eye on the Jackson Sate trumpet student. Rigel’s solo in “Moondance” turned out to be one of the most iconic moments of the season, and certainly one for The Cadets’ history books.

“To have Rigel as a member of the CBrass showcases how our talent as black HBCU students often goes highly unnoticed,” said Travis Higgins III, Trumpet Instructor for The Cadets and an HBCU alumnus himself.

Travis received his Music Performance degree from Prairie View A&M University, a historical black college and university just north of Houston, where both his father and grandmother also attended school.

Ironically, Prairie View A&M recently became rivals with Jackson State, which provided Travis and Rigel with plenty of friendly banter. Beyond that, they also shared a deep, mutual understanding through their experiences at Southwestern Athletic Conference HBCUs.

The similarities between trumpeter and trumpet instructor are striking. Both come from remarkably musical families: Travis’ grandmother was a saxophonist, pianist and music teacher, and his father was a trumpet and bass player. He began his first music lessons at age 4. Rigel comes from a musically-inclined Caribbean family. His mother and sisters sing; his dad plays piano, guitar, and drums; his brother plays piano, saxophone, and drums; and Rigel plays trumpet and is also a self-taught music producer.

Despite a rich, musical background and an impressive resume, Travis says people tend to question his playing ability because of his alma mater.

“When I marched with Bluecoats as a soloist and a screamer duetist in 2014, 95-percent of the members and staff had never heard of my HBCU,” he said.

To date, there hasn’t been a lot of cross-over between HBCUs and DCI. The Cadets Staff is now actively seeking to change this, but in the meantime, the few HBCU students who have “made the jump across the track,” as Travis put it, have been supporting each other behind the scenes.

“It doesn’t matter where you’re from or what school you attended, what matters is what you do while you're there and how well you can play,” Dr. Timmey Zachary, Travis’ mentor and trumpet professor at PVAMU, would remind him.

This mindset was further instilled by Ricardo Brown, Travis’ trumpet instructor at Bluecoats. Ric is a legendary Cadets soloist/screamer from the early 2000s who is now the Brass Caption Head for the Mandarins. He also earned his degree from an HBCU -- Norfolk State University.

“Black performers are treated differently,” Ric would tell Travis. “We are held to a higher standard than any other individuals.”

Travis took those words to heart every day on the field. “I had to be greater than great itself,” he said. “Stepping into this element requires you to be at your absolute best 100-percent of the time, and to give indubitable thought to both your musicianship and your character.”

It is this same standard that he, in turn, reminds Rigel of today, although Travis is quick to point out that Rigel has always impressed the CBrass Staff, both in musicianship and character.

It’s easy to write off HBCU bands and DCI drum corps as too different.

“The traditions of each HBCU band encourage and ignite the cultural tradition of African American music as a part of black culture,” Travis explained. “Each school performs in their own traditional way, which makes each HBCU band unique – their marching style, how they carry themselves, their characteristic playing, their entertaining arrangements, and high-energy shows – ”

Actually, that does sound a lot like drum corps.

Despite surface-level differences, HBCU marching bands and DCI drum corps share the profound experience inherent to every marching ensemble: The powerful ability to entertain and move an audience through music and movement within an impactful show theme.

“When we have representation from the HBCU world in The Cadets, we tap into a gold mine of hidden talent,” Travis said.

In the summer of 2021, Rigel was one of four brass players who came to The Cadets from HBCU bands. He is returning this year as a lead trumpet.

“The path that Travis and Rigel have traveled is so similar, and I feel most fortunate to have been part of their journeys,” said Dr. Matt Stratton, Brass Caption Manager for The Cadets. “It has been awesome to watch Travis share his insight, knowledge, and experience with Rigel. This story is a celebration of the culture we are creating at CBrass.”

Corps administration and educational staff are actively engaging in conversations with HBCUs across the nation in an effort to further connect our worlds and invite more HBCU musicians to become Cadets.

If you would like to support The Cadets as they prepare for their 2022 season, please visit cadets.org/maroon-gold.