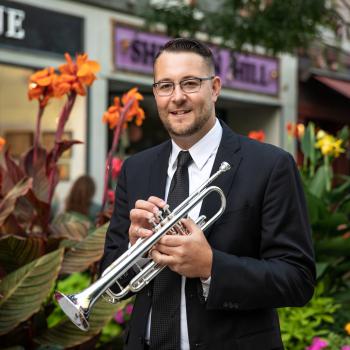 An accomplished trumpet player, music educator, clinician and author, Dr. Aaron Witek has been involved with the marching arts activity as an instructor and designer since 2001. He is the Brass Pedagogical Coordinator and Assistant Brass Manager for the 10-time Drum Corps International World Champion Cadets Drum Corps and previously served as the Assistant Brass Caption Head for the Blue Stars Drum Corps.

Witek earned a Doctorate of Music in Trumpet Performance from FSU where he also completed his Master of Music degree in Performance. In addition, he received his Bachelor of Music in Education degree at the Crane School of Music at SUNY Potsdam. His principal teachers have included Christopher Moore, Bryan Goff, John Ellis and Alex Jokopi.

In the fall of 2018, Witek joined the faculty of Ithaca College’s School of Music as Assistant Professor of Trumpet. He held this same role from 2013-2018 at the University of Louisiana Monroe (ULM) where he was part of the faculty ensemble in residence, Black Bayou Brass.

As a noted author, Witek has been published numerous times in the International Trumpet Guild Journal. His book entitled Gordon Mathie: The Treasured Legacy of a Master Teacher and Performer, published by WR Enterprises, was released at the 2014 International Trumpet Guild Conference and is available for order at www.wiffrudd.com. In May 2018, Witek released his first publication with Mountain Peak Music entitled Solo Duet Training for Trumpet.

Students who study under Witek have seen various successes, including receiving International Trumpet Guild Scholarships, becoming a division finalist in the Music Teachers National Association Competition, and selection as a semifinalist in the National Trumpet Competition. Witek was recognized and presented with two awards from ULM: The Foundation Award for Excellence in Teaching, and the College of Arts, Education, and Sciences Dean’s Award of Excellence. While a graduate student at Florida State University (FSU), he was the recipient of a Teaching Achievement Award. In addition, during this time he directed the FSU trumpet ensemble – a group that had been a finalist at the National Trumpet Competition several times, and won second place.

Aaron Witek is proud to be a Yamaha Artist and a Monster Oil Performing Artist.