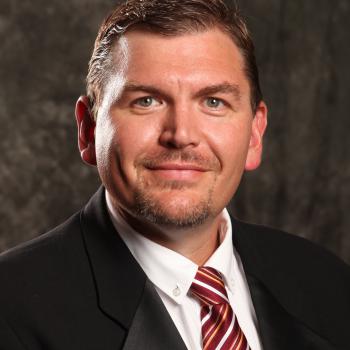 Matt “Doc” Stratton returns to The Cadets to serve as the Brass Caption Manager. Doc has been actively involved in the marching arts for 30 years. He began his time in the drum corps activity as a marching member of the Patriots and finished his marching career with the Cadets of Bergen County. He has taught the Patriots, Magic of Orlando, Blue Stars and, most recently, served as a member of the Bluecoats’ brass leadership team, helping the corps earn its first DCI World Championship in 2016.

Doc is a proud artist and clinician for Yamaha and a founding member of the Ultimate Drill Book Educational Team. He maintains an active schedule representing those affiliations as performer, clinician and adjudicator throughout the U.S. and abroad. He has been nominated for the Who’s Who Among America’s Teachers at both the Secondary and University Levels.

Outside of the marching arts, Dr. Stratton is a Professor of Music and holds the Charlene Hawkins Chair of Instrumental Music at Olivet Nazarene University, where he serves as the Director of Bands in the School of Music. Under his direction, the 200-member Tiger Marching Band has performed as the lead band in the London New Years Day Parade, the Presidential Inaugural Parade and the Rome New Year’s Day Parade. In addition to his duties with the marching and basketball bands, he conducts the wind ensemble, teaches courses in the music education and music theory curriculums, and offers applied tuba and euphonium lessons as his schedule permits.

Doc holds the Bachelor’s Degree in Music Education with Performer’s Certificate from the State University of New York College at Fredonia, the Master of Music in Tuba Performance and Doctor of Music in Brass Pedagogy from the Indiana University Jacob’s School of Music. He is a member of Phi Mu Alpha, Phi Kappa Lamda, the College Band Directors National Association and the International Tuba and Euphonium Association. His primary teachers are Don Burke, Russel Mikkelson, Rudy Emilson, Harvey Phillips and Daniel Perantoni.

When not teaching and traveling, Doc loves spending time with his family. He is married to his lovely bride, April Stewart Stratton, and together they raise four children, Connor, Lillian, Camden, and Parker. The family resides in Bourbonnais, Illinois.

“I am thrilled to be returning to Cadets to lead the brass program into the future. My aim is to make Cadets brass second to none in our activity through professional brass pedagogy within a system that will drive us to compete consistently at the highest level in drum corps. It is an honor to be able to state that I have served as the Brass Caption Head at both of the places where I marched.