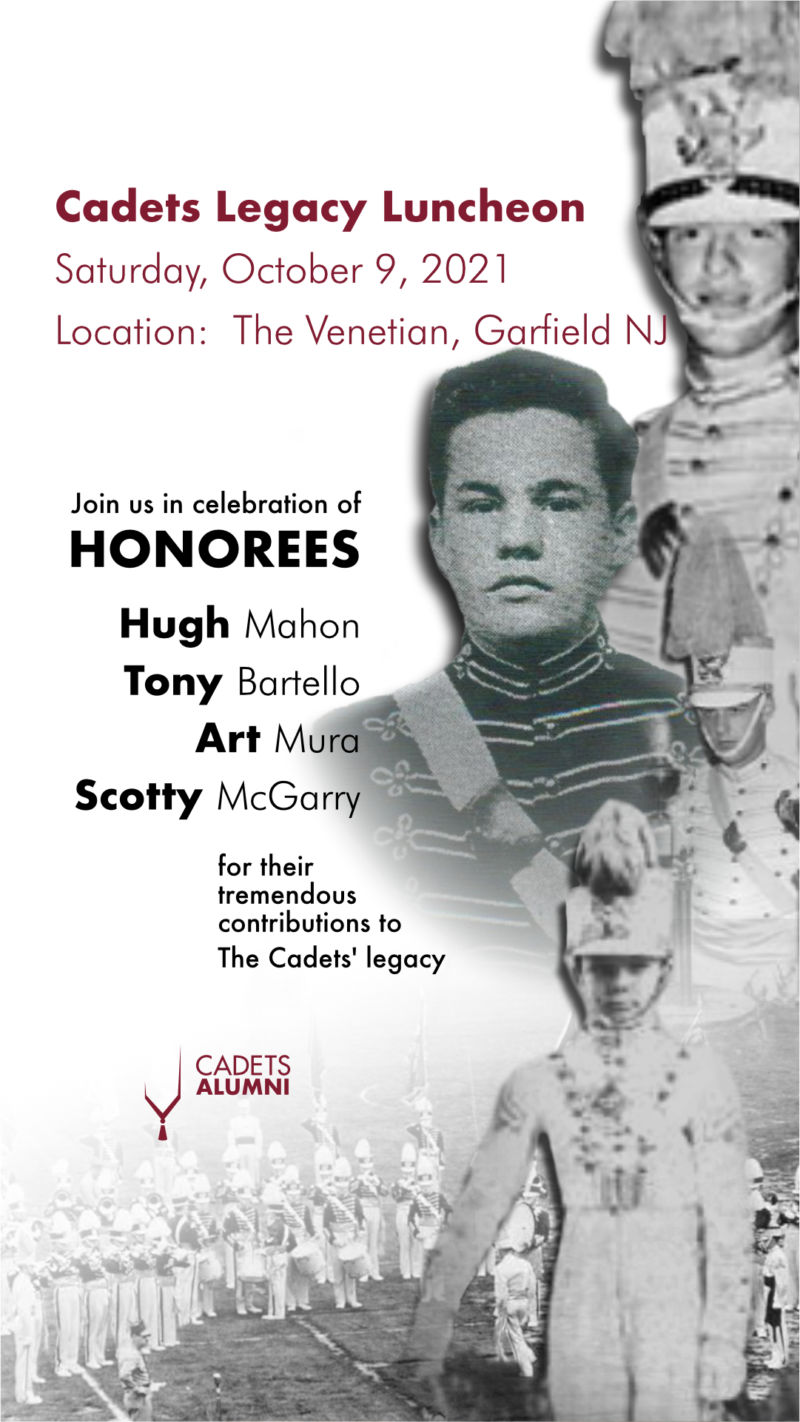 As part of the 2021 Homecoming Weekend event series, The Cadets will hold a very special Legacy Luncheon at the gorgeous Venetian venue in Garfield, N.J. The Legacy Luncheon will feature a delicious menu paired with a high-end selection of wines, and will honor the legacies of four members of the corps’ history. This week, we’re shining a spotlight on one of those four: Anthony Bartello.

THE “HEART OF THE HOLY NAME CADETS”

The 1957 season was especially challenging for the Holy Name Cadets as many experienced “regulars” aged out or left the corps. We struggled during the early part of that season, but by the September timeframe, things started to finally jell. Then, in Atlantic City, a twist of fate: Due to torrential rains, the venue for the Finals was moved from Bader Field to a cavernous inside location: Convention Hall. Bart’s leadership as drum major in 1956 and 1957 was both inspirational and motivating, and his talents were put to the test for the 1957 season.

His collaboration with instructors Jim Costello, Al DeRosa, and fellow Cadet Don Angelica produced one of the most brilliant drum corps show concepts not only for the Cadets’ 1957 concert selection, but grew to become accepted and widely copied in most drum corps performances. It entailed having Don Angelica come forward from his position in the concert formation and perform  a featured solo out front alongside Bart, as he conducted. This concept was fashioned after a Boston Pops or New York Philharmonic performance in which a vocalist or soloist shares the spotlight with the conductor. It was a clever concept and added a new entertainment dimension to the show, superbly performed by Don Angelica. It was also an instantaneous and overwhelming hit with the fans,  and, in turn, it excited the corps members as they needed every visual/general-effect point that could be squeezed out of the judges’ scoring sheet.

Well, all the stars aligned that weekend in Atlantic City for the American Legion National competition of 1957, and with Bart out front as drum major, the Cadets won both the preliminary and finals competition.

In 1958, Bart entered the US Army through the ROTC program as a graduate of Seton Hall University. He was assigned to the Military Police as a Second Lieutenant and served in US locations. He was honorably discharged in 1961 with the rank of First Lieutenant, married his current wife, Barbara, and began a successful career in sales and marketing.

Bart then returned to his drum corps roots. During the 1960s, he served as a judge with the Eastern States and All-State Judges Associations, judging M&M. In addition, he was an M&M instructor with the Little Falls (NJ) Cadets.

In recent years, Bart has been a leading voice in The Cadets Alumni programs and is a regular at alumni gatherings. He served as the co-chairman for the 50th Anniversary Celebration in Atlantic City (2007), currently serves on the Cadet Hall of Fame Nominating Committee, and is the liaison to the Heritage Selection Committee.

You can’t talk about Bart without mentioning his long and loving relationship with Barbara, his wife of 62 years. Their beautiful family includes sons Alfred and Tony, and daughter Lisa. Bart and Barbara are the proud grandparents of seven grandchildren and one great-grandchild.

Anytime Cadets gather to sing their cherished corps song, “O Holy Name,” Bart steps forward to lead the assembled voices in a continuing demonstration that the bond of Cadets lives on.

We hope you’ll join us at the Legacy Luncheon to honor Bart on Saturday, October 9! Click the button below to reserve your seat at the table, or click here to read more about each event.