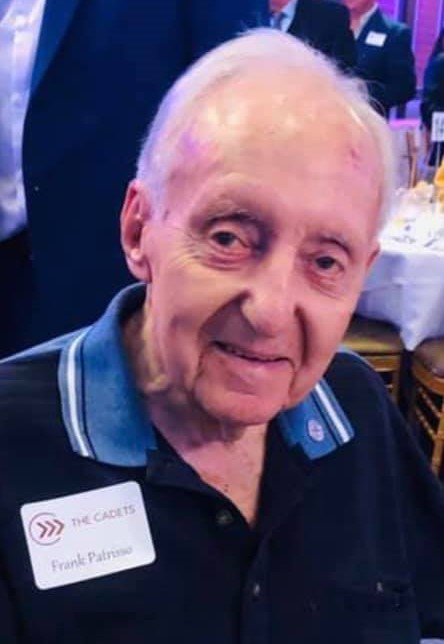 Frank and his two brothers, Nicholas and Ed, were founding members of the Holy Name Fife, Drum & Bugle Corps, the predecessor to the Holy Name Cadets, Garfield Cadets, Cadets of Bergen County and, eventually, The Cadets.

According to his obituary, Frank joined the United States Navy at the age of 17 and served in World War II from 1943 to 1946. He was stationed on the USS Lynx (AK-100) Ship in San Francisco which carried cargo to locations in the Asiatic-Pacific Theater. He achieved the rank of Coxswain and received several medals for his service.

For over fifty years, Frank worked as a professional photographer alongside his partner and brother, Nick Patrisso. “What I remember about Frank and Nick were that they were the owners of Ackerman Studios in Clifton, N.J.,” said Cadets Alumnus and Board Member Greg Cinzio. “When I worked on my original history book in 1976… I went to them looking for any Cadet photos they may still have, hoping to find a few rare ones. I was shocked to find out that both Nick and Frank had been taking photos of the Corps since 1934… They were gracious to offer the photos to us and were eager to share some early Cadet stories as well,” he recalled.

Alas, the last of our founding fathers is gone. We are grateful for their contributions, and for the contributions of Frank and the Patrisso family through the years.

We would like to pay tribute to the last founding member of the Holy Name Cadets by gathering as many current Cadets and Alumni together as possible to sing “O Holy Name” at the funeral home on Friday, April 9, at 7 p.m. If you can attend the service, please where your Cadet colors and join at the funeral home main entrance this Friday at 7 p.m. (address below). Alumni will then enter the funeral home as a group to pay our last respects and to sing our corps song for Frank and his family.