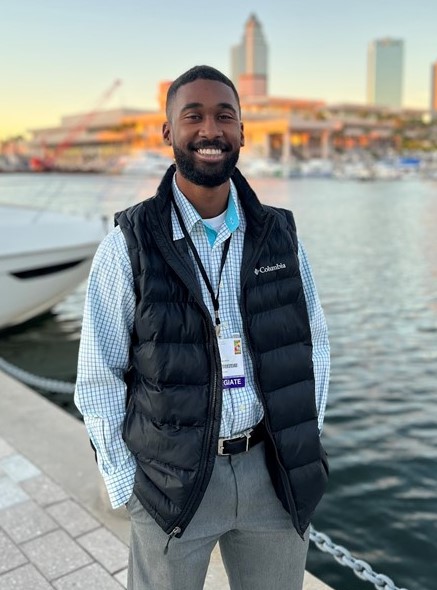 Tyler Williams is a visual clinician and show designer from Fort Lauderdale, FL. Tyler is actively involved with the marching arts and has been an instructor for programs associated with the Florida Marching Band Coalition, Bands of America, Winter Guard International, Florida Federation of Colorguards Circuit, and Drum Corps International.

Tyler's DCI career began in 2015 as a performer with The Boston Crusaders and then with The Cadets 2016. He was contracted to march his age-out with the 2020 Edition of the Bluecoats. A member of the visual team in the 2022 season, Tyler is excited to return for 2023 and continue building a tradition of excellence.

Tyler studied music education and tuba performance at the University of North Texas under the direction of Donald Little. There he was a member of the Green Brigade, Wind Ensemble and the Brass Band (under the direction of David Childs). He currently attends Florida International University and Performs with the Wind Ensemble and Big Band. Since 2017, Tyler has worked with a number of South-Florida Bands as both a visual and a music technician. Recently, he has worked with the Stoneman Douglas Eagle Regiment, the Coral Springs Marching Colts and the Cypress Bay Sound of Thunder where he currently serves as the Visual Caption Head and Music Caption Supervisor. Tyler is currently the Music Caption head and Arranger for the Legacy Production Company an Indoor Winds based in Miami Florida.