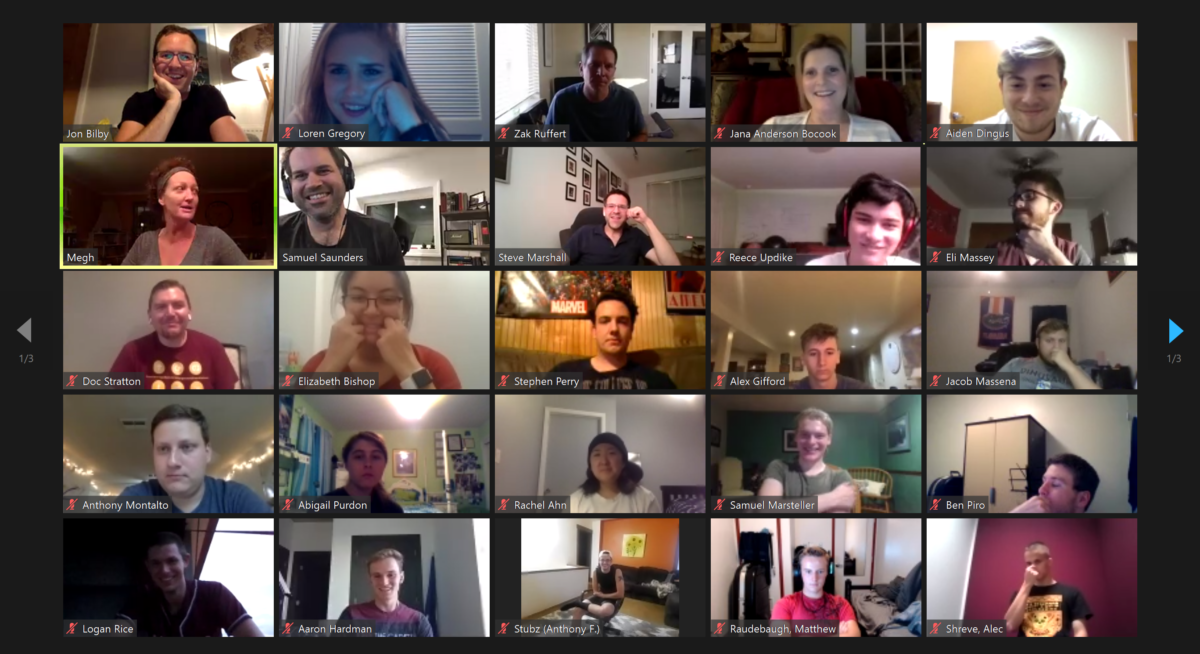 On September 13, 2020, The Cadets Brass held their regularly scheduled rehearsal as a part of their fall curriculum. The brass line is currently working on a warm-up exercise which concludes with a nostalgic chord progression from The 1998 Cadets production. The brass will debut this video in The 2020 Cadets Story on Facebook and Instagram Live on October 25, but last weekend, the ’98 brass line got a sneak peek.

Brass Caption Manager Matt Stratton is committed to fostering a strong connection between The Cadets brass and their alumni. He has worked hard to cultivate a talented teaching staff with years of Cadets experience. To further connect the current members with their roots, Matt invited members of the 1998 brass line to join the current brass players for the final hour of their call.

Once introductions were made, the 1998 alumni shared stories, laughing reminiscing about a summer they could only describe as “smooth sailing.”

“I knew this was something special early on,” 1998 Alum and Cadets Visual Designer Jon Bilby recalled. “The corps was just on fire by the January camp.”

The immense success of the 1998 Cadets comes as a slight surprise, considering that the corps had learned and planned to perform the music of Shostakovich’s “Festive Overture” during much of the off-season. This show concept was scrapped in May in favor of a brilliant new piece of music entitled, “Stonehenge” by Belgian Composer Jan Van der Roost.

The talent-rich ’98 corps rose to the challenge and learned the new book quickly. The brass alumni recalled turning in tape tests every camp (cassette recordings they had to record and submit to the staff monthly). Sometimes, the caption manager would call out one player to stand on a table and perform a section of the show solo. Mortifying though it must have been, they had plenty of fun laughing about it in retrospect.

The fire of that corps endured throughout the summer. They remembered getting so hyped up before shows (particularly Allentown, of course) that anyone in the lot would have seen the brass bus shaking and rocking back and forth. To the surprise and awe of any onlookers, the hornline would then come off the bus locked into “Cadet mode,” lining up in perfect twos in stoic silence.

The 1998 brass players also remembered that their staff was committed to marching and playing all the time to mimic the high physical demand of the drill. Small sectionals meant “tracking” their music (marching around the track while looping a musical passage over and over). However, Mellophone Alum Jana Anderson Bocook recalled that the mello line was so talented that year that they scrapped their brass warm-ups for the much more challenging front ensemble ones and often tracked themselves to a convenience store or ice cream parlor rather than sticking to the field.

As part of the move-and-play focus, the brass section also added the now commonplace visual warm-up at shows, and included step-outs in their warm-ups for the first time – changes which were controversial among corps veterans and alumni at the time.

Even though the talent of the corps seemed to pave their way, the summer was certainly not without the typical adversity a Cadets tour provides. The ’98 alumni recalled brutal circle-drill sessions, often exceeding 210 beats per minute for five or more minutes at a time.

The alumni could have gone on and on sharing memories from that summer, but Matt opened up the conversation to the current brass players to ask questions. One Cadet wondered about the different approaches between The Cadets’ Brass Caption Managers of the 90s, Larry Markiewicz, Donnie Van Doren and Frank Sullivan.

One alum recalled a Donnie Van Doren quote that summed it up well: “The hornline takes on the personality of whoever is in front of them the most.”

Though no one said it, the weight of that statement shifted the gaze back to Matt Stratton and his 2021 brass line, and the clear effort to keep them connected with their rich tradition as Cadets.

As they work towards Summer 2021, The Cadets Brass is fired up and in constant pursuit of excellence. The reunion concluded with a debut of The Cadets’ new warm-up and chord progression for the alumni on the call. The members’ personal video recordings were cut together with footage of the 1998 corps.

The Cadets Brass will debut this piece and others in our special upcoming broadcast of The 2020 Cadets Story on Sunday, October 25 at 3 p.m. EDT.

READ MORE ABOUT THIS EVENT

The Cadets will hold their next full-corps meeting and rehearsal on Sunday, September 27 from 5 to 9 p.m.