Chris has been involved with the drum corps activity for over 25 years. He has marched with the Cadets of Bergen County in the early 90s and served as a brass technician and brass caption head for the Glassmen of Toledo, Ohio from 1997 to 2003. He also served as brass caption head for the Boston Crusaders for the 2005 season and worked with the Bluecoats from 2012 to 2013. Most recently, he has served as the Brass Ensemble Consultant for the Blue Stars Drum and Bugle Corps from 2014-2018.

Chris was born and raised in St. Petersburg, FL and is a graduate of the University of South Florida, where he received a Bachelor of Arts Degree and Masters Certificate in Horn Performance. He is a member of the Southwest Florida Symphony Orchestra, performs with The Florida Orchestra, Sarasota Orchestra, as well as the Venice Symphony. Mr. Allen is currently the Orchestra Director at Newsome High School in Lithia, FL and serves as the Youth Symphony conductor for the Sarasota Orchestra. He is an active member of the National Association for Music Education, Florida Music Educators Association, and Florida Orchestra Association.

Chris currently resides in Lithia, FL with his wife Melissa, and their two children Briana and Joshua. 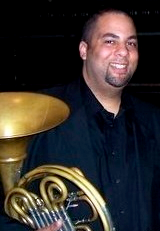